Everybody on the same starting line

The hero of all adventures, Indiana Jones would smile happily if he saw Petri Kiikka, founder of the Sontek Group, taking part in the world’s toughest vintage and classic endurance rally in a Volvo, that will be driven by his father Martti Kiikka. The Peking to Paris 2019 Motor Challenge crosses 11 countries, lasts 36 days and runs 12,000 kilometers. Indiana Jones can’t see this race, but you can.

Extreme conditions on the roof of the world

The first Peking to Paris Motor Challenge was run in 1907. For the Finns, the rally route is historic, as Carl Gustaf Mannerheim, the Marshal of Finland, rode the same route on a horse just a year earlier.

Now, the seventh Peking to Paris 2019 Motor Challenge adds 12 000 to 13 000 kilometers to the odometer, depending on the route choices and whether the drivers get lost. Martti and Petri Kiikka are the only Finnish driving team in this legendary rally that includes 120 cars. At Martti’s suggestion, the rally arrives to Hyvinkää, Finland on 28-29 June, for the first time in the history of the rally.

“There are all kinds of drivers in these rallies,” says Martti Kiikka. “In the last year’s rally, one guy was missing a passport and couldn’t start the race. He turned out to be a king of a country and could not be out of the country for more than 30 days, otherwise he may have been dethroned. Participants also include former Formula engineers and team managers. Everybody stands on the same starting line. Part of the charm of the race is that you are part of a community. There are no titles.”

120 cars will start the race on June 2nd from Beijing

Kiikka’s 1962 model Volvo PV544 carries the number 59 on it. “It is estimated that 10% of the cars cannot make it to the end, for one reason or another. We expect to cross the finish line in Paris, France on July 7th. There are thousands of kilometers with no road at all. No roads except camel trails. The Volvo is able to wade in rivers if there are no bridges. Pushing cars out of mud is part of the race”, says Petri Kiikka. Sounds like a movie?

The driving conditions range from calm weathers to sandstorms. Mongolia with its more than four kilometers high mountain peaks is such a vast country to drive through. The terrain varies from swamp to jungle. And includes the world’s largest desert, the Gobi Desert.

It has been agreed that Petri drives the asphalt stages and Martti takes care of the rest.

There will be many stamps in the passports. “And where there are no border lines, we will make one,” says Martti Kiikka. He is grateful to the race organizers whose experience is world class. 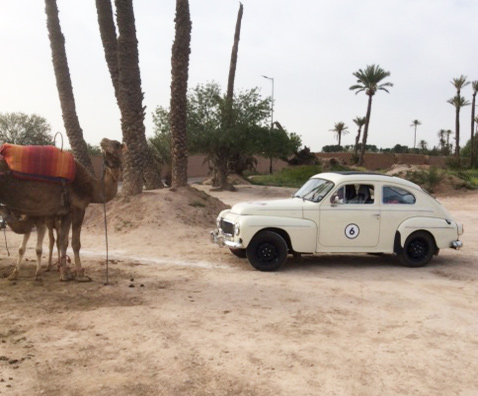 How did it all start?

“Our car hobby started quite unintentionally. Me and my sister bought an MGB convertible as a gift to our father for his 50th birthday. Father then decided to drive rally with it”, says Petri Kiikka. “And Petri joined the race with his own Volvo Amazon. Petri was under 20 years of age and had just got a driving license”, says Martti Kiikka and smiles. They both like big vintage cars. In addition, Petri has a huge Matchbox collection as a gift from Martti.

“The vintage cars are fascinating, just like old times in general. Life used to be simpler and easier, and cars were made to last”, says Martti Kiikka. “Those old-time toys have soul and character. They are just like the Beatles of their time, lasting over times”, adds Petri Kiikka. 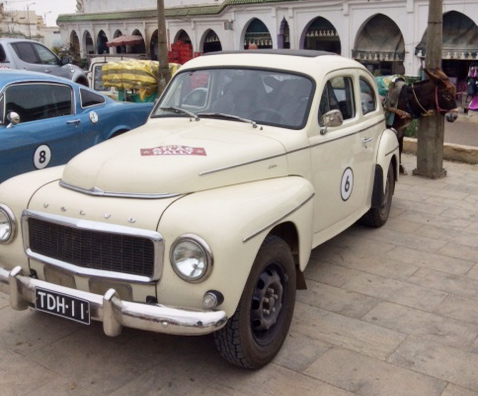 Martti has license plates from 15 long races on his wall. For Martti “long” means over 10,000 kilometers. What about Petri? “This is my first endurance race. But there has been lots of training.”

The tough race demands guts. “One Lancia codriver lost his nerves during the first day and the driver had to manage the rest of the race on his own. In spite of some incidents he managed to make it to the finish line. This is my first long race with my son. It may be that all goes great. Or we might end up arguing. When you are tired you may act foolishly. Fortunately, this is not my first race. We have been driving the previous races with my wife, and we are still happily married”, says Martti Kiikka. Now his wife will come by a fan bus from Ulaanbaatar to Novosibirsk to cheer for them.

“The daily stages in this race are up to 900 kilometers. If we get stuck in the mud or sink into the sand, we push or pull the car out and just try to catch the others”, says Petri Kiikka. The race includes special stages where you race against time. Both endurance and speed are crucial.

Is the famous duct tape the most important car repair tool? “When our engine fell down in the Gobi Desert we lost 17 minutes of racing when fixing the engine back. The car must be as simple as possible! Our car has been built so that there is space for important spare parts under the rear seat. Simple equipment, wrench, screwdriver and tape must be included. Suspension and electricity will certainly break down. The fuel is guaranteed to be poor quality. That’s why your imagination is the most important tool. You need MacGyver’s character”, laughs Martti Kiikka.

What are the features required from the codriver? “When things go well, it is enough to separate the left from right and just follow the odometer. When things turn bad, one must know how to improvise”, says Petri Kiikka.

The Kiikkas drive for young people and for the world peace

It is important for both Martti and Petri Kiikka to drive this race, as they want to support certain charities and to promote the important activities created to support Finnish youth. This time there are two charities in particular: www.koulutuselamaan.fi and www.reservinmentorit.fi. During the race, the sticker “The wheels rotate for world peace” shines on the side of Volvo. “Everyone can influence with their own actions, even to world peace,” says Martti Kiikka. 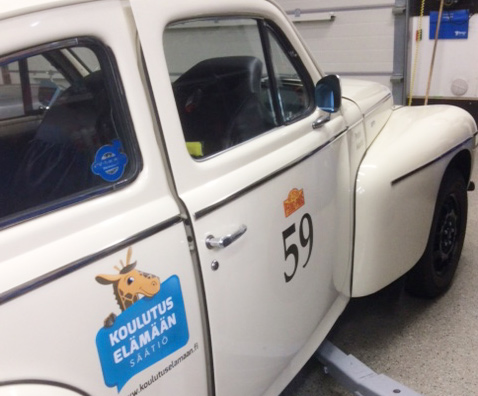 This legendary race brings all the cars together in one place, just like the brilliant digital asset and brand management service Gredi Content HUB gathers all the materials in one place.

You should come and see when these 120 (minus 10%) endurance cars that survived the adventure are on display in Hyvinkää Sveitsi and in Vauhtipuisto 28-29.6.2019. On Saturday, June 29th, the race qualifying will take place in Hyvinkää as well! In addition to the Kiikka’s Volvo, many other world classics participating the Peking to Paris 2019 rally, are on display, for example, Alfa Romeo, Buick, Bentley, Ferrari, Jaguar, Mercedes Benz, MGB, Morris, Oldsmobile, Pontiac, Porsche, Rolls Royce and Rover.

“Just to mention a few. And also, the replica of Contal Mototri that participated the very first race in 1907. In 1907, Contal Mototri was stuck in the Gobi Desert, and the drivers barely made it to Beijing. Now the car has another chance. Two Dutchmen are going to try their luck this time,” says Petri Kiikka.

Since life is an adventure, what is the best tip for the trip? “Don’t use your elbows. You may yourself get in to trouble with the same person you have just passed using elbow tactics”, says Martti Kiikka wisely.