Happily over the finish line – an adventure in 11 countries, for 36 days and over 14,000 kilometres

Plenty of incidents and a car with almost every part broken and repaired. Petri Kiikka, the founder of the Sontek Group, the parent company of Gredi, returned to Finland wiser and with great experiences. Petri participated in the world’s toughest vintage and classic endurance rally, The Peking to Paris Motor Challenge, in a Volvo driven by his father Martti Kiikka.

The seventh Peking to Paris Motor Challenge added 14,000 kilometres to Volvo´s odometer. Daily stages reached up to 650 kilometres. Martti and Petri Kiikka were the only driving team from Finland.

The cars started on June 2, 2019 from Beijing, China, and finished in Paris, France on July 7, 2019. Kiikka’s 1962 model Volvo PV544 finished fourth in the classic car category. It is a great achievement in a race where not everyone even gets to the finish. The first cars dropped out already in China. Not even Kiikka’s Volvo could make it undamaged. Among other things, the exhaust pipe broke down four times.

“120 cars started from Beijing. 90 cars were left when the rally arrived from Russia to Finland. Crossing the finish line in Paris remained just a dream for many”, Petri Kiikka begins. Rally visited Hyvinkää, Finland for the first time ever on 28-29th June. In addition to the rally enthusiasts and cheerleaders, Martti and Petri Kiikka were welcomed by Matti Vanhanen, Speaker of the Parliament and Simo Lampinen, a rally legend. From Hyvinkää the rally continued across Europe to Paris. But what happened before that? 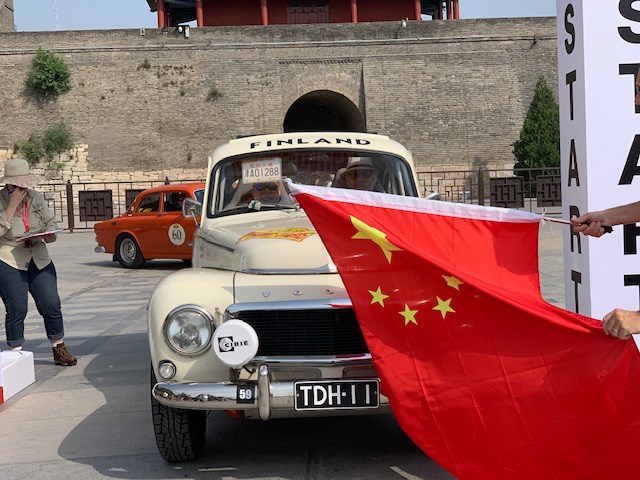 In the East, everything is different – or is it?

Before arriving in Hyvinkää, Finland, there were tough experiences in China, Mongolia, Kazakhstan and Russia. “80% of survival depends on good preparations, whether related to the car, fuel or food supplies. You can’t drive in China without a Chinese driver’s license, so everyone got a new driver’s license right away!”, Petri says.

“In many cities, and even in remote areas, there were cameras, crowds of spectators and cheering children”, Petri smiles. Sometimes they navigated with a paper map, sometimes with the cell phone GPS, and sometimes just by guess, because Martti and Petri do not master Chinese or Russian. Thus, they made several extra legs when driving in Beijing and St. Petersburg. In the mornings, the organizer gave newest changes to the route map, if the route had been changed, for example due to floods.

“Mongolia was a tough place for a car. The constant pounding in speeds over one hundred kilometres per hour takes a toll on you. The chassis must be flexible and durable at the same time. The body frame was deformed badly, and the road clearance fell lower. The roof should have had roll bars in case of crashes. We were lucky not to have an engine failure”, Martti reveals. 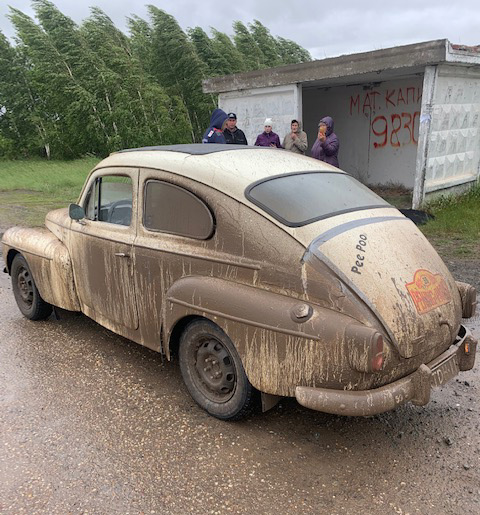 The weather was a surprise. “The weather was really good, and there were no sandstorms this time. In one special stage the car was so muddy, that driving was worse than during the winter in Finland. In the mountains there were minus degrees with occasional sleeting. Luckily the thunderstorms only hit during the evening, not while driving”, says Petri. 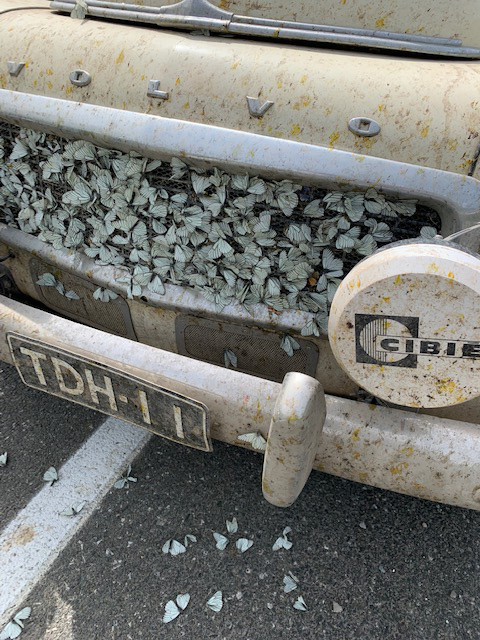 Fierce racing eats up both men and cars

Rally days stretched up to even 12 hours. Some were special stages, some demanded both speed and precision with penalties if you finished too late. Or too early. “You had to turn the wheel even when tired. Fortunately, the adrenaline kept us alert”, says Martti. “We always had a full breakfast in the camp. When driving we only had ice tea, water and boiled eggs. There was usually no time for a meal break”, Petri says.

“It was a nice surprise that my body endured well, and I feel great even after this trip”, Martti sums up. “We didn’t have any big arguments. Despite the age difference we share the same values ​​of life, and everything went well”, Petri sums up. 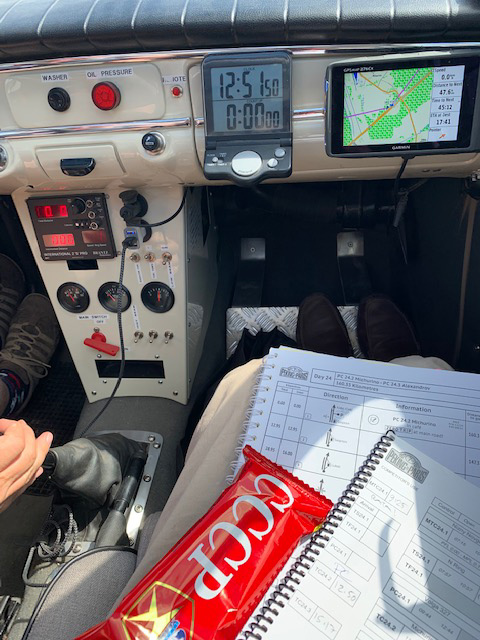 The number one favourite of the rally was Gerry Crown, 87, who won the classic car category. Gerry has a long history of winning, and now he was driving a Leyland with the strongest engine in the rally. The cars that finished in the top, like Gerry’s car, were mainly built by driving team members. Many also checked their cars in the camp. The car was lifted up, tires off, inspection of all nuts and bolts. And the same routine every night. “The Steam Ghost was the favourite of the press, and with extra care that too managed to finish the race”, says Martti.

Although the speed was high and major damages hit many of the cars, the only dead bodies were those of millions of mosquitoes that hit windshields. “The worst accident was when a Belgian driver rolled his Porsche and was taken to a hospital. But he then continued the rally with another car”, says Petri.

“The competitors felt very tense in the beginning and hence stayed strictly focused in the rally. Upon arrival in Europe our common experiences turned into good new relationships. Of course, we talked a lot about the cars, but also about the challenges of the economy, the environment and the humankind as a whole in a changing world we all live in”, Martti ponders.

“In all countries we were treated very well. The huge size of the crowds was amazing! The more remote the place, the better the treatment. Families living in clay houses looked happy, even though their economy is probably tight and life expectancy low”, says Martti and Petri. “Car repairmen in remote villages were eager to offer help free of charge. It was painful, when people living in tough conditions, were not accepting any payment for their help”, Petri says.

What was the best lesson learned? “No matter how busy you are, sit down and think for a minute before you take action. One hundred kilometres in the wrong direction is not the best solution”, Petri jokes seriously. 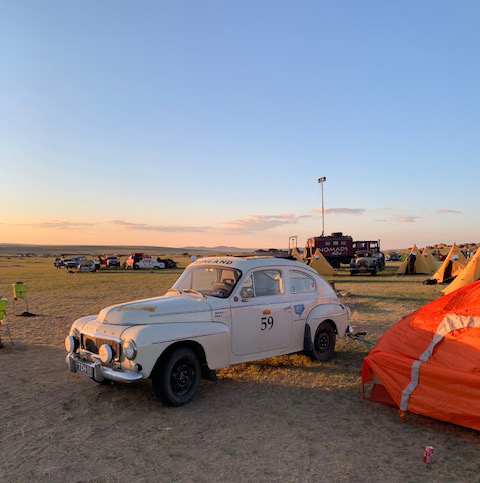 Charity is the rule and not an exception in this rally. Many competitors used the rally to raise funds for their own charity projects and wrote about the projects on their blogs. The Kiikkas supported charities that promote young people and world peace.

Would you go again?

“Right now? Of course! It would be a great tradition in the family if after 10 years I went with my daughter to drive the same rally”, Petri says. Martti admits that he has talked with Petri about many new rallies. After all, it would take only about 1,000 hours and three years to prepare the car ready to rally.

In the Peking to Paris Motor Challenge, not all cars on the starting line survived to the finish. Some cars got lost, some broke down, and some lost power under heavy use.

In heavy use, the usual problems of losing power or breaking down will not occur when the organization and its ecosystem are tuned to Gredi Content HUB. Gredi Content HUB brings together all the content and materials in one place. From there, marketing, communications, sales and partners, as well as media, can easily find, use, and responsibly distribute them to anyone in need. Whether it is pictures, videos or other materials.

Get to know Gredi Content HUB and watch our 1 minute video: https://www.gredi.fi/en/get-know-gredi-content-hub/

Organizer of the Peking to Paris Motor Challenge: www.endurorally.com